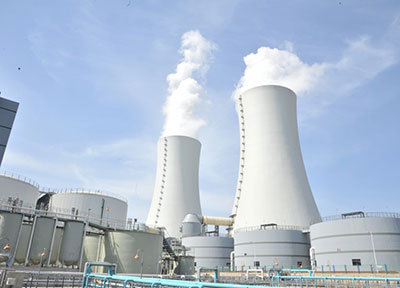 Designed to minimize pressure drop across the ductwork, the turbine exhaust duct supplies steam to the air cooled condenser in power plant operation. This efficiency creates lower steam velocities and better steam flow. For instance, by minimizing the numbers of bends, elbows and internal ductwork vanes, steam flow is assisted which helps lower pressure drop and creates a better, more even flow distribution.

For two decades now, dry cooling systems for power plants are increasingly desired as an alternative to wet cooling systems. There are a few circumstances in which dry cooling systems are generally preferred. FOr example, as early permission granted in order to build a power plant. Specifically where there are going to be many locations, and where permits must be applied for early. Another situation is where water supply is an issue - whether there is no available water or water is scarce. When the use of water would be too expensive or an ecologically sensitive subject now or in the future. Sometimes it is the plume of a wet water tower, even when reduced by the use of a hybrid wet cooling tower, is not desired for whatever reasons in a location where using an air cooled condenser in power plant operations.

The system is also made with vacuum units. This is for the services of hogging and holding. Hogging and holding is needed in order to give a means by which the air can be evacuated once accumulated in the ACC and steam ducts before going through an idle period and next being returned to operation. After the evacuation reaches a preset level of vacuum which is low enough to enable proper steam condensing.

Holding is done throughout regular continuous service during the part of the operation where the air which is continuously leaking in the unit through the gland steam of the steam turbine is evacuated. To not evacuate the air would result in accumulate and spots would form which cause loss of performance which can hurt the operation.

Two technologies are used for hogging and holding. Steam ejectors, or liquid ring pumps. Steam availability during start-up is what usually determines which system is used. Piping between air cooled condenser, pumps, and vacuum units are located within the plot plan of the ACC (air cooled condenser in power plant). Usually, the piping includes the condensate collection line, drain pumps return line to the condensate tank, the air evacuation line and the balancing line. When needed, other sections will be provided as part of the system so that it may interface properly with third party equipment and or diagnostics.

Check out our other resources about air cooled condensers & power plants :

Get in touch
This site uses cookies. By continuing to browse the site, you are agreeing to our use of cookies.
https://www.hamon.com/cookies/
OK
Find out more.